From the questions weve been fielding, it appears many of you plan on serving prime rib (also known as standing rib roast) as your centerpiece meat this holiday season.

Lets be honest: prime rib is one of the most expensive meats youll buy. At a local market, it was selling for $11.99 a pound, meaning a whole 7-bone roast weighing from 14 to 20 pounds could lighten your wallet by $175 or more. No wonder you suffer a twinge of anxiety every time you open the refrigerator door.

Though intimidating when raw, the sight awes when properly cooked: smoke-bronzed bones rising from a pepper-flecked crust, with the meat sufficiently sanguine to thrill any carnivore.

Highfalutin enough to impress the Downton Abbey crowd (untold generations of Englishmen have called it roast beef), but primitive enough to give you a caveman rush from gnawing the meat off the delectable rib bones. Unfortunately, there wont be enough bones to go around as each bone represents two servings. One of lifes injustices.

You could, of course, purchase a boneless rib roast, but why leave those glorious bones behind? Take them off yourself, if you desire a boneless roast, leaving plenty of meat on the bones. Then smoke the ribs at a future grill session. (Theyll be the best beef bones of your life.)

There are many ways to cook prime rib. I know, as Ive tried them all: reverse-searing; smoking; indirect grilled in a salt crust; etc. (Do not let anyone, no matter how well-intentioned, talk you into cooking this beautiful hunk of meat in a slow cooker or InstaPotcringe-worthy methods making the rounds on internet pin-up boards.)

For my money, the best way to achieve a crusty, sizzling exterior and perfect medium-rare meat is to cook it on a rotisserie, aka, spit roasting. As a cooking method, its monastically simple. Rub the roast with olive oil. Make a series of slits in the meat with a paring knife, then slip small pieces of sliced garlic and rosemary sprigs in the holes. Season generously with coarse salt and freshly cracked black pepper. Using butchers string, tie the roast at intervals to keep the collar from separating.

Slide the first rotisserie fork down the spit, prongs facing inward. Run the spit through the center of the roast. Attach the second fork and center the roast on the spit. Tighten the screws on the spit using the tines of a table fork. Heat your grill to medium (about 400 degrees). Insert the end of the spit into the motor as per the manufacturers instructions and turn on the motor. Adjust the counterweights, if necessary, to ensure the prime rib doesnt wobble. Slip a disposable drip pan under the roast to capture the drippings.

Grill until the interior of the meat is done to your liking125 to 130 degrees is the sweet spot for most folks. Take temperature readings on an instant-read thermometer after the first hour. Do not overcook the roast. If anyone in your party likes their meat well-done, serve them an endpiece.

Stop the motor, and using heavy duty grill gloves, carefully transfer the roast on its spit to a large cutting board, preferably one with a deep well to collect the juices. Remove the spit (again, carefully, as it will be hot) and the butchers string. Carve. Serve, if desired, with Horseradish Cream. The recipe for the prime rib can be found here. 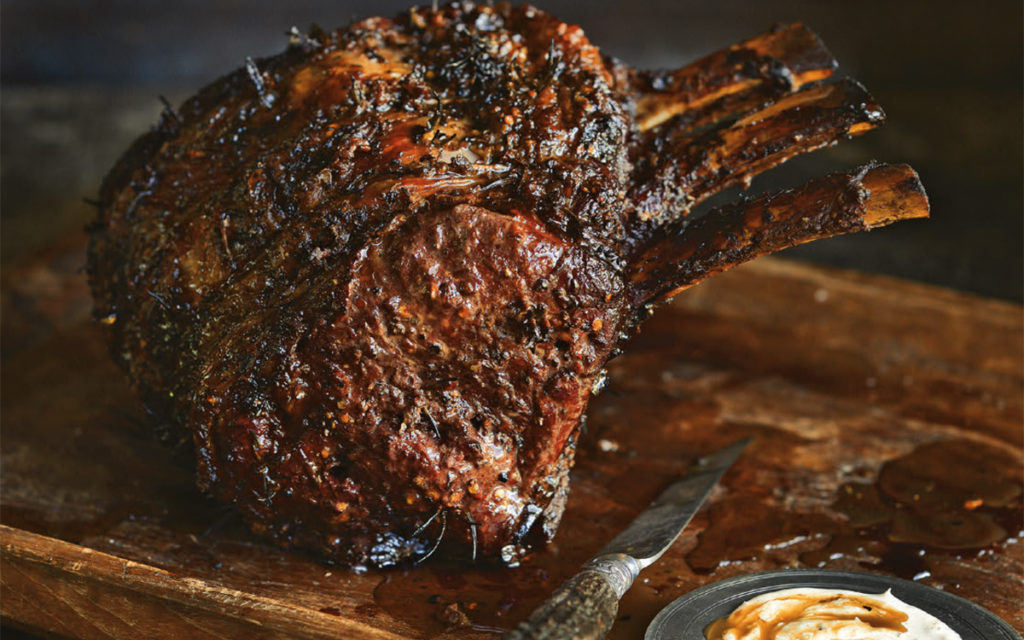 This is just one of the many recipes students will learn to prepare at Steven Raichlens Barbecue University this coming June at the Montage Palmetto Bluff resort in Bluffton, South Carolina. For details, click here.

Other Delicious Recipes for the Holidays

What are your plans for the holidays? Tell us about it in the comments or by sharing it with us on Facebook, Instagram, Twitter, or the Barbecue Board.

The post The Best Prime Rib Ever appeared first on Barbecuebible.com.

Ready to try something NEW and Healthy on the BBQ?
Try Healthy BBQ recipes at PaleoQue

Summary: Get a barbecue shrimp recipe to create a variety of dishes you can serve on your next barbecue party.

How do you like the taste of barbecued chops or steak? If you love them, you must try barbecued shrimp for a change. Barbecued shrimp is as tasty as any barbecue can be. Just by imagining barbecued shrimp makes my mouth watery. You have tried pork, chicken, sausage, hotdogs, and other barbecued meat. Why not try barbecued sea foods this time. If you tried it probably in a party or in a restaurant, and you want to know the recipe, worry no more for you can have the barbecue shrimp recipe you fell in love with.

Barbecue shrimp recipe is a very simple one. The ingredients are not hard to find. Unlike other barbecue recipes you might have read which have “never-heard” ingredients. You know what I mean. I once saw a recipe book with a picture that made my stomach growl and when I tried to look at the ingredients, hoping I could have a taste of that delightfully, tasty, appetizing, and tempting dish, my jaw literally dropped up to my chest. And then I said where on Earth I can find these unfamiliar ingredients. The dish looked so simple that I thought it’s chicken feed and that I could do it even with my eyes closed (kidding!). I was so upset for a week because I lost the chance of savoring the unforgettable recipe. I don’t mean to sound so bubbly. I just want you to realize how a recipe can be if the ingredients are not available on the market. Well, barbecue shrimp recipe is not only simple to do, but the ingredients are literally available in any supermarket.

Directions for cooking:
Prepare your outdoor grill or barbecue to medium heat. In a large bowl, mix together olive oil, lemon juice, onions, shallots, garlic, and parsley. Mix in the peeled shrimps. Cover and marinate in your refrigerator for at least two hours. Drain shrimp, reserve the marinade in a clean container for basting, place shrimps on skewers or on aluminum foil. Barbecue for 6-8 minutes on each side, and make sure to baste shrimps with marinade to enhance the flavor and to prevent from drying. Place shrimp on a large platter and garnish with thin lemon wedges on the sides. Serve with a creative salad, garlic bread, and most importantly the sauce for a more tempting presentation. This barbecue shrimp recipe serves 8-10 persons.

No matter how you cook the shrimp, it will still be yummy. But, I can assure you this barbecue shrimp is more than delicious. Actually, delicious in an understatement! Just the smell of it, makes your mouth watery! Try it and let your family and friends have a taste of your new discovered shrimp barbecue recipe.

Barbecue Sauce For A Perfect Barbeque

﻿Barbecue Sauce For A Perfect Barbeque

When someone mentions barbecue images comes to the mind like cooking at the backyard grill, a social gathering, cooking outdoors and cooking meat slowly over wood and smoke that adds flavor to the food.

Different cooks have different preferences and style in their cooking. Some prefer rubbing the seasoning whether wet or dry prior to cooking and some prefers to soak the meat first in special marinades that could be sops, mops and finishing. The preparation and ingredients for marinating may differ from region to region the preferred wood to be used can also differ. However, no perfect barbecue will taste as good without the perfect barbecue sauce.

Barbecue sauce preparation can either be sweet, sour, tangy, spicy, hot, thick or thin. The varieties are almost endless which makes barbecues popular because anyone can make his own special preparation depending on taste and anyone can create his own way of serving the barbecue.

Recipes for barbecues can also be guarded. And good barbecue sauces can be purchased at almost any store. But the only perfect barbecue sauce is the one that you can create for yourself.
Remember whatever works for you and your family can be a great barbecue sauce. So start experimenting that is the only way to start good cooking.

The basics of Barbecue sauces…

Tomato based barbecue sauce is the most widely used. Some say that it is the most popular. Its popularity however may be due to the simplicity of preparation and besides; tomatoes are ingredients that could easily be found. The point to remember in preparing tomato-based barbecue sauces is to cook the tomatoes very well in order for the flavor to blend with the other ingredients.

Mustard based sauces are preferred in North Carolina. The mustard based barbecue sauce is great for grilling pork.

Vinegar is great meat tenderizer. It is also more acidic than tomatoes. Because of its acidic content, vinegar based sauces has a tendency to penetrate deep into the meat. To make this barbecue sauce more flavorful, experiment mixing it with chili, cider vinegar or red pepper, sugar salt and all the other ingredients that you want it to have.

Barbecue sauces today has different uses departing from its traditional purpose. It now serves as a condiment that is present on almost any table like ketchup, salsa, salt, pepper and Tabasco.

However, if experimenting with food is not your greatest strength, you can always find great sauces in any store. To make great barbecues, one rule to follow is not to place too much weight on the “with smoke flavor” label that many bottled tomato sauces advertise itself. Smoke flavor is what is barbecuing all about. The flavor has to come from the wood not the bottle.

More than likely your recipe will call for either round or chuck steak, but you can also use cube steak.
The type of steak you use is entirely up to your palate. Swiss steak can also be either baked in the oven, cooked in a slow cooker or crockpot, or even cooked in a large skillet on top of the stove.
You will not find many recipes that tell you how you to cook Swiss steak on top of the stove, but it can be done.
If you decide to try to prepare one on your stove top use any of the recipes that you find, just cook on the stove top and check often.
These Swiss steak recipes call for them to be baked in the oven, but you can also prepare them in the above mentioned ways.
For the first recipe you will need the following ingredients:
a covered baking dish,
2 pounds of steak,
salt, pepper,
garlic powder,
1 onion sliced,
4 ounce can of drained mushrooms, and
1 15 ounce can of tomato sauce.
The first step is to cut your steak into serving sizes, season the steaks with the salt, pepper, and garlic powder.
Place the steak into a baking dish top with the onion slice.
Now, pour the mushrooms and tomato sauce on top. Kind of level the ingredients and bake covered for 1 ½ hours at 350 degrees. This recipe can also be prepared on top of the stove just as easy. Just remember to check on it and be sure that the liquid is not evaporating.
You can always add just a bit more tomato sauce or even a small amount of water if needed.
If you like your Swiss Steak a bit spiecier, try this one. You will need:
round or chuck steak, (tenderize the steak first),
15 ounce can of tomato sauce,
1 large onion sliced,
2 tablespoons of vinegar, and
8 ounces of your favorite picante sauce or salsa.
Place the steak in the baking dish, add the onion on top and then pour in the remainder of the ingredients. Bake at 250 degrees for around 20 minutes.
Serve with salad and (baked) potatoes.